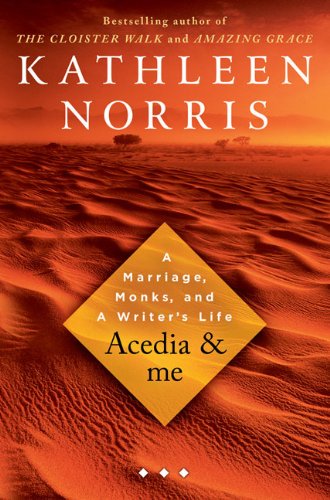 Acedia & Me: A Marriage, Monks, and a Writer’s Life

In this penetrating theological memoir, Norris ( ) details her relationship with acedia, a slothful, soul-weary indifference long recognized by monastics. Norris is careful to distinguish acedia from its cousin, depression, noting that acedia is a failure of the will and can be dispelled by embracing faith and life, whereas depression is not a choice and often requires medical treatment. This is tricky ground, but Norris treads gingerly, reserving her acerbic crankiness for a section where she convincingly argues that despite Americans’ apparently unslothful lives, acedia is the undiagnosed neurasthenia of our busy age. Much of the book is taken up with Norris’s account of her complicated but successful marriage, which ended with her husband’s death in 2003. The energy poured into this marriage, Norris argues, was as much a defiant strike against acedia as her spiritual discipline of praying the Psalms. Filled with gorgeous prose, generous quotations from Christian thinkers across the centuries and fascinating etymological detours, this discomfiting book provides not just spiritual hope but a much-needed kick in the rear.