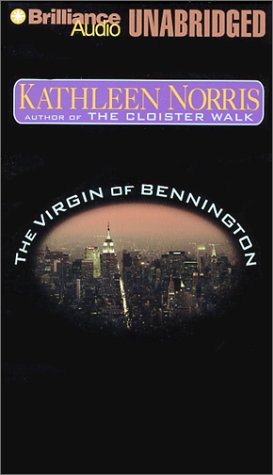 Thirty-five years ago, poet Norris (), the studious daughter of a schoolteacher and professional musician, left her sheltered upbringing in Honolulu Navy housing, ill-prepared for life at wildly liberal Bennington College. Though she fell into an incongruous lesbian relationship, and later, an affair with a married professor, her naivete earned her the nickname "the Virgin of Bennington." Landing a job at New York's Academy of American Poets after college, under the tutelage of arts administrator Betty Kray, alternately described as an "anchor," "mentor" and "friend" who "set a high standard by which I still measure myself," Norris attended poetry readings nearly every day for five years. Norris's first taste of literary success came in her early 20s with the publication of . The polished, classy voice of professional reader and Brilliance Audio director Sandra Burr brings an immediacy and freshness to the snippets of poetry (by well- or lesser-known poets, including Norris herself) interspersed throughout the narrative. Less suited to the audio format are the long lists of poets attending functions, and lengthy excerpts from Kray's personal papers. Personal recollections of drug use, encounters with Halston, Keith Richards, Stanley Kunitz, Bob Dylan, Erica Jong, Patti Smith, James Wright—not to mention her relationships with Warhol assistant Gerard Malanga and author Jim Carroll—belie Norris's quiet, cerebral style and self-proclaimed gullibility, which she chalks up to the "wantonly innocent" zeitgeist. While autobiographical, Norris's memoir is also a tribute to poets and to Kray, whose 30 years of groundbreaking work on behalf of poets included a pilot program to bring poetry to public schoolchildren.