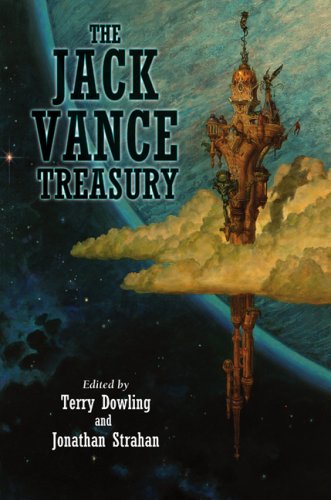 Encompassing multiple permutations of the planetary romance genre, this best-of collection gathers 18 seminal if sometimes redundant stories and novellas, dating from the 1950s to the 1970s, from SF Grand Master Vance. A brief, illuminating snippet by Vance follows each piece. Novellas include "The Dragon Masters," in which two rivals can't bring themselves to work together when strangers descend from the sky to kill them all, and "The Last Castle," in which slaves revolt and lay siege to the castles of their former masters. Standout stories include "The Moon Moth," the tale of a clueless diplomat who must learn the intricacies of a highly patterned society, and "The Gift of Gab," in which men discover a strange intelligence while mining the bounty of off-world seas. Though the dearth of significant female characters makes the collection feel dated, Vance's stylistic bravado and lush, baroque prose create compelling worlds that blur the line between fantasy and far-flung future-world SF. Vance has won Hugo, Nebula, World Fantasy and Edgar awards.