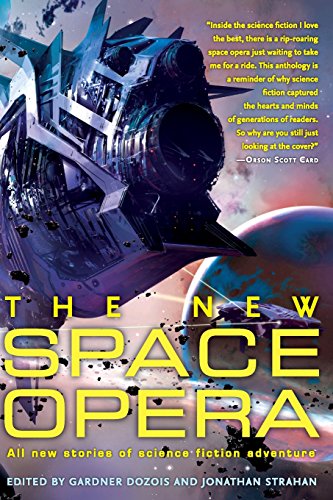 The new space opera shares with the old the interstellar sweep of events and exotic locales, but Dozois and Strahan’s all-original anthology shows how the genre’s purveyors have updated it, with rigorous science, well-drawn characters and excellent writing. Many of the 18 stories play with the scope that characterizes classic space opera. In Greg Egan’s “Glory,” creatures embody themselves as aliens to perform archeological research, only to get caught up in a struggle between two worlds. Robert Reed’s “Hatch,” limited in locale to the hull of a giant ship, proves that the scope of the struggle for life is always epic. Stephen Baxter’s “Remembrance” walks a line between the personal and the global as resisters against Earth’s conquerors remember one man’s struggle against the alien invaders. Kage Baker’s humorous “Maelstrom,” in which an acting troupe on frontier Mars puts on a Poe story for the miners there, tells a personal story in an epic setting. The new space opera teaches us that despite the bizarre turns humanity may take to conquer these outré settings, a recognizable core of humanity remains. (June)