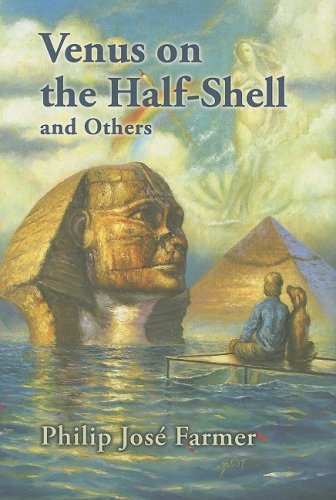 Venus on the Half-Shell and Others

Farmer appends his own name at last to his stories written under pen names borrowed from other authors' characters, most famously , a novel allegedly by Kurt Vonnegut's fictional science fiction writer, Kilgore Trout. As Harry Manders, created by E.W. Horning, Farmer pens the suspenseful “The Problem of the Sore Bridge—Among Others.” As Rex Stout's psychologically and physically maimed Paul Chapin, he offers the violent “The Volcano.” A story by Harlan Ellison's Cordwainer Bird, “The Last Rise of Nick Adams,” discloses that Bird was related to Farmerian heroes the Shadow and the Spider. Finally, after demonstrating how Tarzan might have sounded had he been written by William S. rather than Edgar Rice, Farmer dons the mantle of Conan Doyle's Dr. Watson and introduces Tarzan to Holmes in “The Adventure of the Peerless Peer.” Only a writer as mature as Farmer could have pulled this stunt off so successfully.