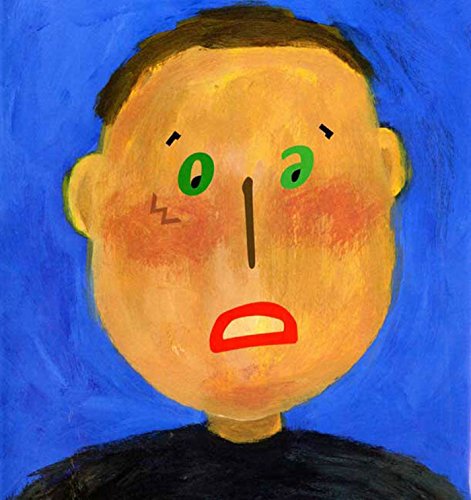 Seeger, who played with letterforms in , gives new meaning to the word "typeface" here. In this diverting book, oversize adjectives describe children's reactions to changing weather, and the letters in each word reappear in close-up portraits. "Walter was when... the sky grew dark," and a spiky shape on Walter's cheek implies his anxiety. Observant readers soon notice that Walter's eyes are a lowercase and , printed in green, and his eyebrows are black lowercase s, tipped sideways; his nose is a long straight , and his frown is a red capital , turned flat side down. The storm gets worse ("Frederick was when... thunder shook the trees"), but "Delilah was when... the rain turned to snow." Seeger spells out eight key words in multicolored, variable type, then paints corresponding pictures with the tilting or upside-down shapes as facial features; abstract illustrations of flashing lightning and blowing leaves serve as a buffer between each descriptive portrait. The children's names match the alliterative adjectives ("Ursula was .... Henry was "), and readers toy with letter recognition and spelling as they search the faces. The design formula is uncomplicated, but typesetters will be tickled and printers pleased by Seeger's emotive imagery. Ages 3-7.