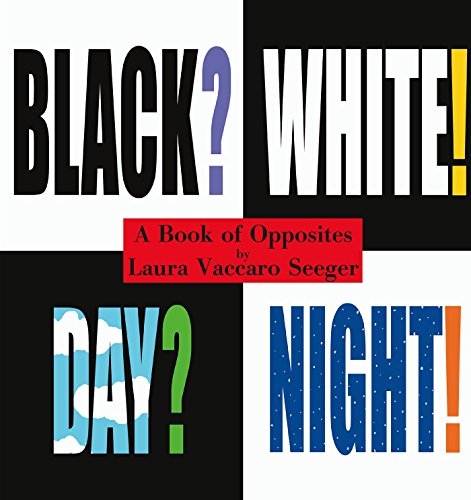 Like Seeger's , this playful volume banks on uncertainty and surprise. Every page is a gatefold, constructed of heavy-duty paper and highlighting a pair of words. In each flap, a die-cut rectangle reveals just a portion of a complete image underneath, and thus a clue to a key word's opposite. The initial spread covers the four title words. In a glossy field labeled "black?," a silhouette of a bat appears in a white square; lift the flap, and the bat transforms into the smiling mouth of a "white!" ghost. On the next page, readers look out a window at blue sky, asking "day?" as a clock strikes nine; lift the flap, and the same nine o'clock appears on a starlit tower at "night!" Readers raise the page flaps as though lifting hinged mat boards away from framed prints; by exposing the concealed margins, they find each word's antonym. Seeger keeps her artwork blocky and colorful, focusing attention on the game and its logical design. She varies her die-cut shapes, so that a "narrow?" vertical line becomes a "wide!" horizontal bar, and five tiny rectangles showing identical blue diamonds ("alike?") open onto a field of blue and white snowflakes ("different!"). The question marks and exclamation points remind readers to keep inquiring, and even the endpapers are labeled "beginning…" and "end" in this satisfying package. Ages 3-7. Agent: The Frank Weiman Literary Group.