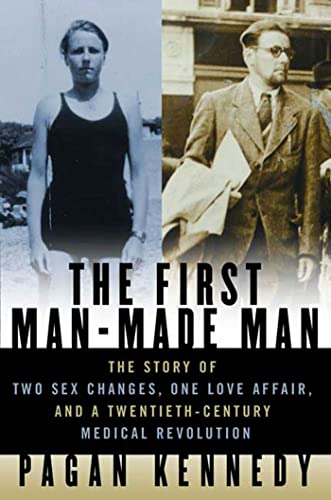 The First Man-Made Man: The Story of Two Sex Changes, One Love Affair, and a Twentieth Century Medical Revolution

In 1950, Michael Dillon, a dapper, bearded medical student, met Roberta Cowell, a boyish-looking woman, for lunch in a discreet London restaurant. During the lunch, Dillon announced that five years earlier he was a woman named Laura, and Roberta stated she was on her way to full womanhood from being Robert. Eventually, Cowell (a former Royal Air Force captain) would garner fame as a glamorous woman and author of the 1954 bestseller , while in 1958 Dillon began a long, rocky journey to become a Tibetan monk. But Kennedy ( ) does far more than detail their short-lived, topsy-turvy transgender romance. She gives us an enlightening tour of how mid-century science conceptualized gender, hormones and transsexual surgery, as well as how advances in plastic surgery for men maimed in WWI became the basis for sex change operations. Kennedy's slangy style—she describes presurgery Dillon as living in the "slushy canal between sexes"—also suits the material. Though her effort doesn't surpass other books on the topic—especially Joanne Meyerowitz's —it's an entertaining and informative popular history.