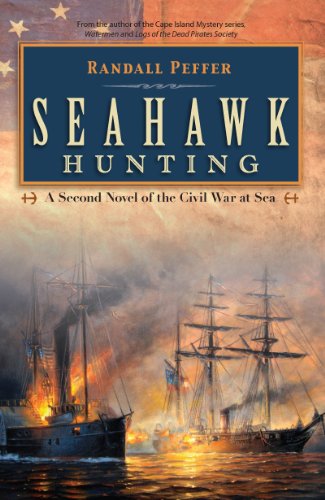 Seahawk Hunting: A Novel of the Civil War at Sea

Capt. Raphael Semmes of the Confederate navy continues his daring exploits at sea, covering vast tracts of the Atlantic between late 1861 and early 1863, in Peffer's engaging second book in his Seahawk trilogy (after ). Seamanship and battles receive scant attention as the narrative dwells on a host of mostly land-bound historical characters, including President Abraham Lincoln; Gideon Welles, secretary of the navy; spymaster Allan Pinkerton; and Jefferson Davis's wife, Varina, as well as Semmes's fictional lover, Maude Galway. Peffer paints a convincing portrait of the destruction and desperation felt on both sides and of the many small, heroic actions (or inactions) that might turn the tide of war. Semmes emerges as a bloodied and battered warrior of epic stature in a losing cause, a Hector yet to meet his Achilles.