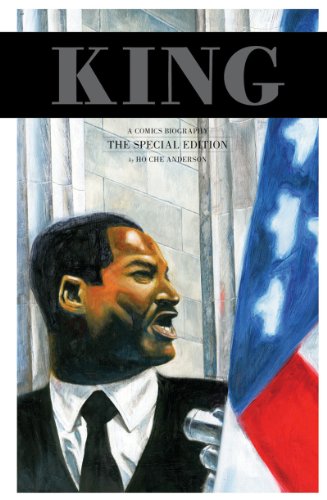 Some who read this deluxe repackaging of Anderson's epic three-part biography of Martin Luther King Jr. will come away thinking that the great leader is even more remote and unknowable than before—and there is nothing wrong with that. King has long been a figure so ubiquitous in American culture that little of his true self remains in his frequently invoked image and words. Anderson does the man a favor by taking a spiky, fractured approach to his subject and refusing to plant a halo on his troubled head. Much of the book (packaged nicely with previously unprinted material, sketches, and a somewhat beside-the-point modern-day “prelude” titled ) tracks King from his college days in the 1950s to his death, jamming each page with noirishly drawn frames and tightly packed political debates. Though all the great moments of his civil rights battle are here (from the March on Washington to his less-successful housing campaign in Chicago), Anderson doesn't resort to the cheap cinematic trick of success and fadeout. There is more disappointment here than celebration, suffused with the sorrowful sense of a long, long battle just barely begun. A crowning achievement, like the man it portrays.