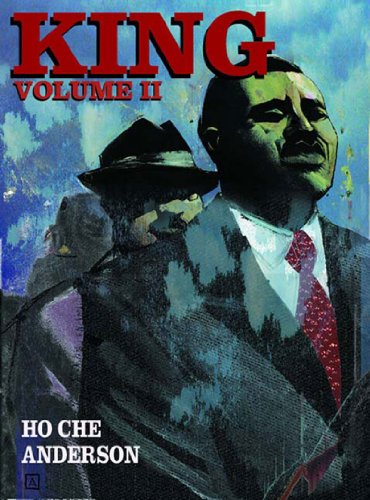 It's been nearly 10 years since the enormously talented Anderson published the first of a projected three-volume interpretive (and often speculative) comics biography of Martin Luther King Jr., but the second volume is well worth the wait. Anderson picks up where he left off. It's 1958, and King awakes in Harlem Hospital after being stabbed by a deranged black woman. Anderson quickly delves into the contentious debates between the elder SCLC organizers and the impatient young SNCC activists. In graphically expressionistic b&w vignettes, Anderson offers a powerful recreation of the Civil Rights movement's seminal events and King's role in them. From 1961's interracial bus rides to the 1963 march on Birmingham and King's now-legendary speech at the Lincoln Memorial, each historic moment is captured through Anderson's terse, confrontational dialogue—constructed to both identify the incident and capture its emotional toll—and his brittle graphic virtuosity. He's dramatized the Civil Rights movement though its failings and factional disputes as much as through its mythlike social triumphs. He presents JFK's as well as ordinary black people's reservations about King and uses King's personal failings—his womanizing and domestic conflicts with Coretta—to provide a study of a magnificent social movement through a candid portrait of its greatest symbolic figure. As in volume one, Anderson combines illustrations and photocopy collage in a rugged chiaroscuro comics style. Without quite achieving the visual brilliance of the first volume, in which every panel seemed designed to graphic and narrative perfection, Anderson's illustrational powers remain eye-poppingly formidable in this new work.