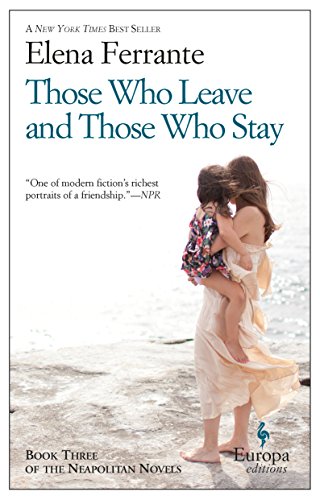 Those Who Leave and Those Who Stay

Surpassing the rapturous storytelling of the previous titles in the Neapolitan Novels (My Brilliant Friend, The Story of a New Name), Ferrante here reunites Elena and Lila, two childhood friends, who dissect subjects as complicated as their own relationship, including feminism and class, men and women, mothers and children, sex and violence, and origin and destiny. As the narrative unfolds in the late 1960s and early %E2%80%9970s, the fiery Lila stays in Naples, having escaped an abusive marriage, and lives platonically with a man from the neighborhood, along with her young, possibly illegitimate son. The feisty Elena leaves town, graduates from a university in Pisa, publishes a successful book, marries an upper-class professor, and moves to Florence, where she gives birth to two daughters. Against the backdrop of student revolution and right-wing reaction, the two women%E2%80%99s tumultuous friendship seesaws up and down as each tries to outdo the other. %E2%80%9CYou wanted to write novels,%E2%80%9D Lila tells Elena. %E2%80%9CI created a novel with real people, with real blood, in reality.%E2%80%9D Are the two women less opposites than parts of a whole? The book concludes not with a duality but with a surprising new triangle involving Nino, another homegrown intellectual, who loves both women. (Sept.)
close
Details