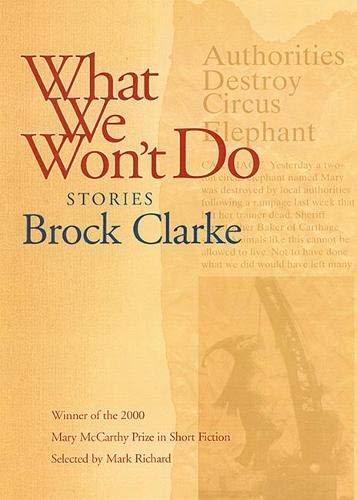 WHAT WE WON'T DO

Clarke probes the hearts and minds of the disaffected and the unfulfilled in this debut short story collection—awarded the 2000 Mary McCarthy Prize in Short Fiction—with most of the 14 entries set in and around the Adirondacks. The author confidently calibrates the form and scope of his stories and subjects, and he rarely misses an opportunity to tackle the big questions. One of his most successful efforts is "Starving," a metaphoric exploration of the emotional difficulties that hinder fathers and sons in their ability to express themselves to one another. His skills are also apparent when he opts for a lighter touch in "Specify the Learners," a hysterical yarn about a 33-year-old man who goes back to sixth grade after attributing his difficulties in life to his previous failure at that level, only to get expelled when he acts on his attraction for his libidinous, newly cuckolded teacher. But too many of the remaining stories are marred by a consistent tendency toward the melodramatic, as Clarke tries to hit one literary home run after another. "She Lived to Cook but Not like This" is a typical example—it starts off well, with a narrator who announces that he destroyed the house that Emily Dickinson lived in, only to follow up with a muddled narrative about the protagonist's dissatisfactions, losing touch with the original premise. Though Clarke's reach often exceeds his grasp, there are some well-drawn characters and intriguing conceits here, as well as flashes of talent throughout the collection.