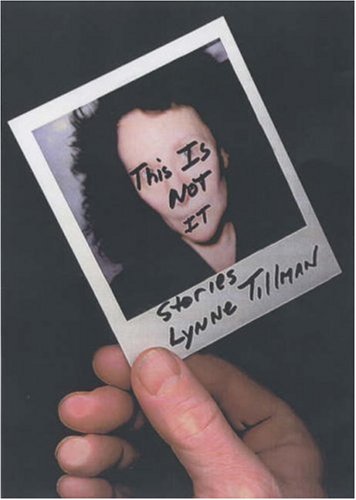 THIS IS NOT IT

A kind of career retrospective for Tillman (), this collection of formally innovative stories from the last 20 years (most of them previously published) follows a cast of artists and grunts from a vanishing New York City bohemia. Or at least those are the characters that one can identify—Tillman uses stylized, anonymous narrators in some of her more minimalist tales. In "Pleasure Isn't a Pretty Picture," a summary of a sexual encounter, Tillman pulls apart the male and female parts of the dialogue and lists them as two different scripts ("She said: That's all right. She said: Are you crying? She said: Again. She said: Almost. She said: You tell that to all the girls"). "Come and Go" shifts deftly among the perspectives of three different characters who pass through the same hospital waiting room: a heroin addict, a psychic social worker with a twisted ankle and a man waiting to hear whether he has cancer. The final section of the story is told from the perspective of the writer who has created these three. Many of the stories are inspired by, or complement works of, contemporary art, and each one has its own title page with a full-color painting or photograph by such artists as Kiki Smith and Jeff Koons. Though some readers may not have the patience for her experimental story structures, others will enjoy her nuanced interior monologues and amusing explorations of how best to reproduce human consciousness on paper.

No Lease on Life