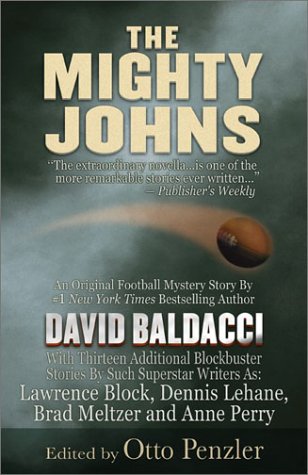 The extraordinary novella by thriller king David Baldacci that leads off this exceptional anthology of new fiction centered on crime and football is alone worth the book's cover price. ""The Mighty Johns"" is one of the more remarkable stories ever written on a sports theme, boasting an array of original plot spins infusing quantum physics (e.g., Heisenberg's uncertainty principle and the possibility of time warp) into this tale of a college football player's investigation into the disappearance of another college pigskin star decades earlier. Every Baldacci fan will want to read ""The Mighty Johns,"" and they'll be joined by legions of others, because veteran editor Penzler has put together a team of authors that's simply all-star. Colin Harrison and Dennis Lehane contribute ""Good Seats"" and ""Gone Down to Corpus,"" respectively, the former a fluid if hard-bitten tale of vengeance, the latter a powerfully moody tale of alienated youth (varsity players). There's a superb offering from Anne Perry, ""The End of Innocence,"" set in a small English village on the eve of WWI. This story imagines a rugby match (fairly chosen as the English counterpart to American football) as a backdrop to murder, delivering an indelible evocation of a peaceful corner of the world shadowed by war. Legendary PI writer James Crumley tells a mordant tale of a former player, now a loser, who turns to bank robbery, in ""Semi-Pro,"" while another mystery great, Lawrence Block, turns in the nicely black-humored ""The Ehrengraf Reverse."" Bestselling authors Brad Meltzer (with the clever, MIT-set ""The Empire Strikes Back"") and Tim Green also take the field, the former pro baller with ""Whatever It Takes to Win,"" with tough-minded PI (former player) action that's perhaps Green's most accomplished writing yet. Mike Lupica, Brendan DuBois, John Westermann, Peter Robinson, Carol O'Connell and Gary Phillips round out the players in the most exciting sports fiction anthology in years. (June) Forecast: New Millennium should score a touchdown on bestseller lists with this dazzling anthology, which will appeal not only to the authors' myriad fans but also to literate football lovers. The publisher is backing the volume with a $200,000 ad/promo campaign.
close
Details