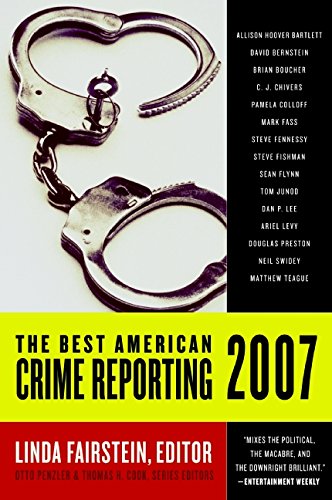 Fans of crime reporting will devour this diverse collection, featuring 15 of the year's best crime stories, written by noted journalists such as Tom Junod ( ), Sean Flynn ( ) and Steve Fishman ( ). Articles (and the crimes they detail) vary widely, one of the book's chief strengths; covering the darkest, most unspeakable crimes is not one of the entry qualifications (though they're certainly represented). One of the brightest pieces, by the 's Neil Swidey, covers the astonishing embezzlement of nearly $9 million by a construction company temp. Several articles examine the possibility of reformation and redemption: magazine's Steve Fennessy reports on the perpetrator of a horrifying kidnapping who is now a physician dedicated to helping the underserved, and the late-coming faith of David Berkowitzâ€”the infamous Son of Samâ€”is cunningly but compassionately examined by Fishman. The uniform quality of research and writing in this collection is startling; stories are so fully fleshed and detail is so rich, it's often hard to believe they're nonfiction. For example, Douglas Preston's article for the catches the revealing moments of his subject (â€œThe Monster of Florenceâ€) like a gem catching light: â€œHe sketched his thoughtsâ€”I later learned it was a habit of hisâ€”the pencil cutting and darting across the paper, making arrows and circles and boxes and dotted lines.â€ Fans of true crime will want to make this book last, but will likely have trouble putting it aside for even a moment