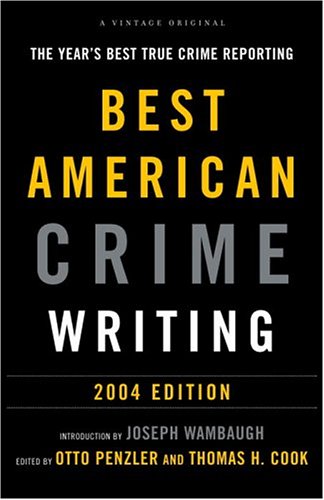 Penzler and Cook's annual compendium of crime journalism showcases 20 essays on some notorious cases, as well as some major criminal justice and political issues, by well-known writers such as Scott Turow and James Ellroy and public figures such as Robert F. Kennedy Jr. Three pieces that first saw daylight in the pages of stand out: Kennedy's defense of Michael Skakel, which will lead many open-minded readers to reasonable doubt about his guilt in the murder of Martha Moxley; James Fallows's "Who Shot Mohammed Al-Dura?," which challenges the conventional wisdom that the 12-year-old Palestinian boy killed in the early days of the second intifada was the victim of Israeli snipers; and author Mark Bowden's "The Dark Art of Interrogation," a discussion of coercive interrogation tactics that is especially timely given the Iraqi prison abuse scandal. The authorial commentaries that follows some of the articles give perspectives that would have been useful for all 20. The lack of a single piece on white-collar crime during a peak period of corporate corruption is regrettable. Still, the variety of subject matter and tone makes this an easy and thought-provoking read. Guest editor Joseph Wambaugh provides an introduction.