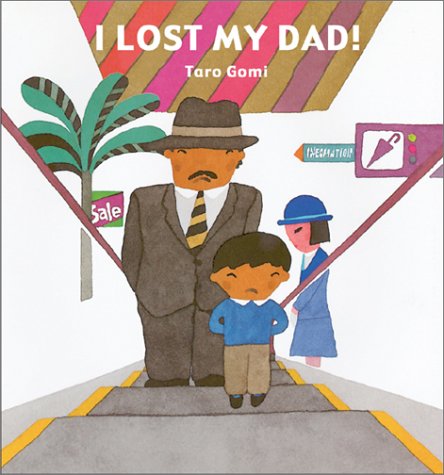 I LOST MY DAD

The creator of here focuses on a common if less universal experience: a child becomes separated from a parent. Originally published in Japan in 1983, the book has minimal text. What carries the book is Gomi's quirky, stylized art and some diverting graphic manipulations to chronicle a boy's search for his father, whom he loses in a department store. As a result of creatively die-cut pages, the boy repeatedly spies only a portion of what he thinks is the man's image (a single arm and leg of a suit, a pair of shoes, a hat). But each time, a flip of the page reveals that the child has spied someone else instead, until at last the boy finds his missing parent on the escalator. The child wanders into the men's room and spies the backs of two men at urinals—neither of whom, he discovers when they turn their heads, is his father. Children will happily take part in this playful quest, which helps to assuage this common fear with its happy ending, and parents will welcome the opportunity to discuss what steps to take if the situation arises in their own family. Ages 4-8. (.)