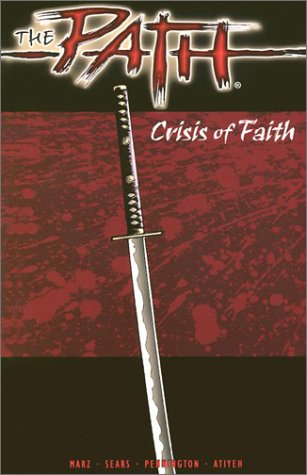 THE PATH: Crisis of Faith, Volume One

One of CrossGen's more distinctive-looking titles, this work is a dark version of samurai manga, set in a mythic land that resembles almost-Japan and not-quite-China. Obo-san, a young monk, has his faith destroyed when "the gods" kill his brother, who had just received one of the CrossGen power-enhancing sigils. Snatching up the murder weapon, Obo-san sets off to find something better to believe in. He's pursued by those who want the weapon he seized: agents of the mad (or maybe possessed) emperor and creatures who serve his country's enemies. But the monk hates the gods and disdains to use either the weapon or the sigil he inherited. Finding a path that will let him survive honorably is bound to be hazardous for Obo-san and for those who throw their lot with him, including a female samurai and a misplaced Viking warrior whose story is told in an homage to the Bayeux tapestry. The action is fluid, with stoic personal commitments set against wild superhuman menaces that lurk everywhere. The impressive art matches the threatening mood. Sears first draws vigorously with a thick black marker, Pennington "finishes" the art by adding fine line work, and then Atiyeh colors the results with a limited, somber palette. The result is lively but brooding, full of fire, shadows and journeys across misty landscapes where the Earth's bones poke through rags of snow. The story is intriguing enough, but readers will want to open the book again just to look at it.