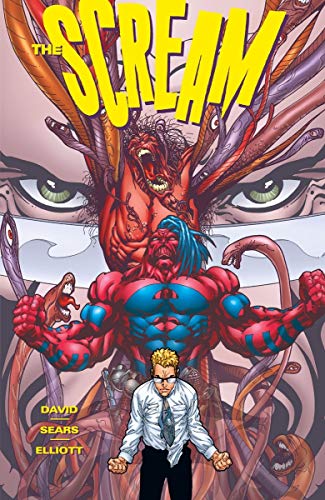 Danny Duncan, the hero, a meek young man fresh out of a short stay in a mental institution and working a job he hates, discovers abilities he doesn't understand. And powerful, secretive men seek to control him for their own purposes. It's familiar, which isn't inherently bad, but there's not enough to make this particular work stand above the rest of the crowd. What sets Danny apart from other superheroes is his vulnerability. His powers cause emotions like fear and anger in others rather than making him strong, meaning he gets hurt in any real fight. And he's unable to help people that matter to him, including his father, who suffers from Alzheimer's, and a new friend who's dying of a brain tumor. But with the genre-required fight scenes there's not enough time in four issues to delve into what makes Danny unique on anything but a superficial level. There's also a disconnect between David's words, which set a darker tone to the story, and the art of Sears and Elliott, which sets a tone of cartoonish villains, impossibly beautiful women and a scrawny yet heroic protagonist.