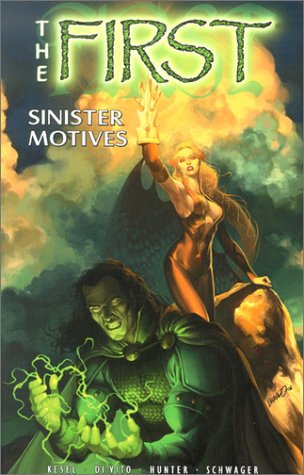 From the title, readers might suppose this comic will reveal the origin of the CrossGen multiverse, especially the Sigils, the mysterious body marks that bestow supernormal powers in every CrossGen book. No such luck. This book is the saga of a race of godlike beings as quarrelsome and horny as the ancient Greek gods of Olympus. After creating the universe, they separate into two rival Houses, plotting against each other and scheming internally as well. The book is a cross between a soap opera and a WWF tag-team extravaganza: page after page of perfectly drawn, perfectly muscled bodies contorted by emotion and by bolts of magical energy. The only character among "The First" who seems capable of unselfish reflection is the adolescent goddess Persha. The unexpected intrusion of Sigil-bearers among The First (which should make them consider the limits of their own power) only intensifies the conflict between and within the Houses. It's difficult to keep track of the many and complex allegiances with so many characters privately plotting. Complications mount and it looks like The First may not actually be first in power after all. How they'll take that news is uncertain, but mature, thoughtful restraint is unlikely.