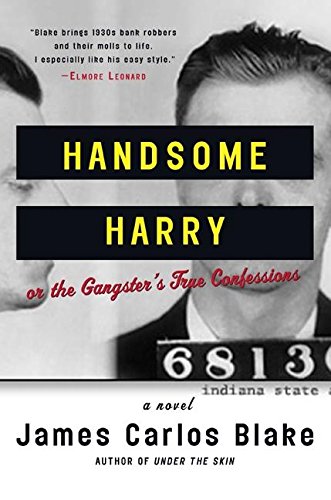 Blake's eighth novel, like his recent (2003), stars an antihero narrator in a world of Depression-era crime. As Harry Pierpont, the self-described leader of the bank-robbing Dillinger Gang, awaits electrocution in Ohio for the murder of a sheriff, he recalls his adventures in a narrative that reads like a good as-told-to true crime story. His teenage criminal apprenticeship prepares him for a career as an "independent fundraiser," aka a stick-up man. With his friend Earl Northern, he holds up his first bank at 21; when their second heist goes awry, Harry ends up in the state reformatory, where he first meets John Dillinger. An escape attempt lands him in the Michigan City, Ind., state pen, and there Harry learns the systematized approach to bank robbery his gang will employ years later after Dillinger helps them escape. The heady account of the ensuing four-month crime spree has the gang taking down banks, buying new cars, mooning over women and shooting policemen in the face. Harry's voice is the smooth, almost affectless vernacular of a hardened con—it's convincing, but it also keep readers at a certain distance. Add that to Harry's exhibited brutality, pitilessness and fixation on sex (the book has a lot of erections—and much is made of the relative size of John and Harry's members), and Blake has created a deeply flawed character, eloquent enough to tell his tale but perhaps not perceptive enough to understand its significance. Fans of true crime and gangster stories will undoubtedly enjoy this "ripped from the history books" adventure as seen through Harry's lens of tough verisimilitude.