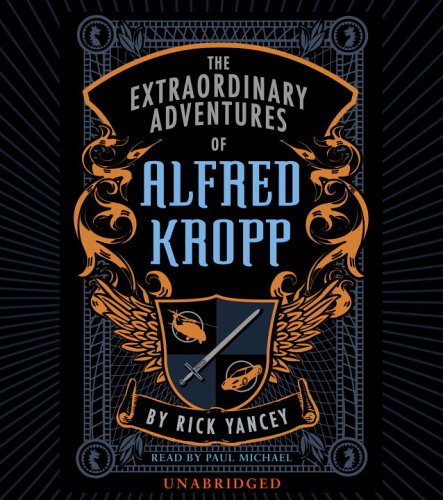 The Extraordinary Adventures of Alfred Kropp

Suspense? Check. Humor? Check. Flashy cars? Check. Violent fight scenes? Oh yeah. Unlikely teenage hero? Yep. This recording of Yancey's action-filled first YA novel has plenty of the elements likely to round up a legion of listeners. Following the death of his mother, 15-year-old Alfred Kropp moves in with his Uncle Farrell, who's trying to make ends meet as night watchman at the offices of a business scion in Tennessee. When Uncle Farrell gets a lucrative offer to "retrieve" a valuable sword from his work building for a mysterious, rival businessman named Arthur Myers, the plot—and Farrell's "accomplice," Alfred—take off on a rip-roaring quest. Turns out the lifted sword is Excalibur of Arthurian legend and the quest involves battling sword-wielding monks and a pack of motorcycle riding shoot-'em-up thugs among other foes, as well as traveling to Europe, and meeting up with a mentor-ish descendant of the Round Table. Listeners never get too comfortable, as Arthur is among the many people and things that are not what they seem. Placing a good-hearted, funny, big lug of a kid into a hero's shoes is the fine premise that gives Michael an entertaining canvas to work with. The slight Southern drawl of Uncle Farrell, the nearly-hissing French accent of Arthur, the nasty notes of the British monks, Alfred's likeable, naïve tones—and yes, the high-octane story—will all keep listeners enthralled. Ages 12-up.