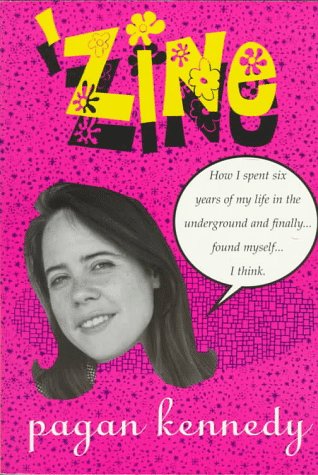 Zine: How I Spent Six Years of My Life in the Underground and Finally Found Myself-- I Think

Between the ages of 25 and 31, fictioneer Kennedy (Stripping & Other Stories) published her own personal fanzine, Pagan's Head. Why? ``[T]o procrastinate, to trick people into liking me, to get dates, to turn myself into a star, and to transform my boring life into an epic story. And the scary thing was, it worked.'' It even got her this book, which reproduces parts of the not-so-immortal Pagan's Head with the author's interpolative commentary. Pagan's Head suggests a puckish, post-college creativity: the author mixes personal essays, cartoons, photos and advertisements, covering such topics as roommates, books, dating and pop culture. In ``The 12 Stations of the Cross My Career,'' Kennedy amusingly annotates the friezes of the incidents in Christ's Passion. Her report on a noted historian is headlined ``Henry Adams: hot, single and dead.'' But much of the 'zine, however well written, is truly ephemera--unless you're a '70s fanatic who obsesses about The Partridge Family. As a whole, the book serves as a growing-up story; the author reflects that her fanzine voice was ``a camped-up version of myself.'' Later, the 'zine became a refuge from the real-life trauma of her father's illness; and finally, she notes, a more mature, grounded voice has emerged. While this book won't convert those outside the author's demographic, it might go down well, say, during a long lounge at a coffee bar. (Sept.)
close
Details