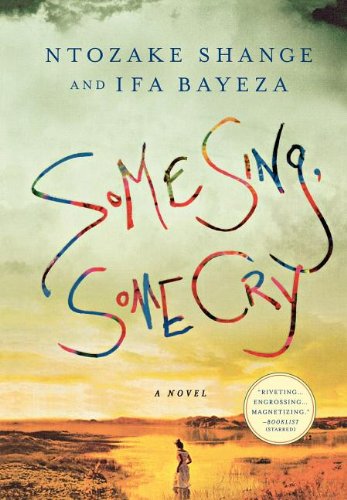 Some Sing, Some Cry

Sisters and playwrights Ntozake Shange (for colored girls who have considered suicide) and Ifa Bayeza (the play The Ballad of Emmett Till) have composed a sweeping African-American saga animating 200 years of history through the voices of seven generations of the Mayfield family's women, beginning with Elizabeth (Ma Bete), a freed slave, and her granddaughter Eudora. Their fate and that of their progeny follows historical events from the Jim Crow South to the civil rights movement with tragedy and triumph: Eudora is gang raped, giving birth to light-skinned Elma, who grows up and moves to New York followed by her half-sister, Lizzie, a single mother with her own tragic past. Lizzie redefines herself during the Harlem Renaissance, abandoning her daughter, Cinnamon, to become a cabaret legend in Paris. Cinnamon carries the story through the 1940s and the 1960s Chicago busing, but here the novel unravels in a rush to wrap things up with too many characters and no time to develop them. This is a complex poetic treatise on race, culture, love, and family, the use of regional vernacular, dialect, and pure song, resulting in a provocative fictional history. (Sept.)
close
Details