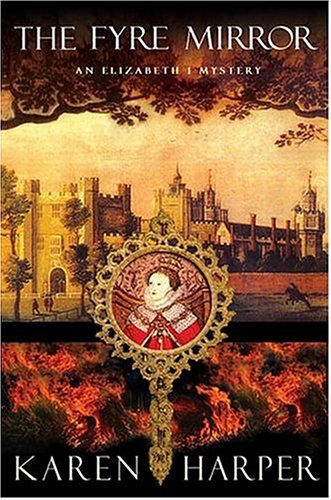 THE FYRE MIRROR: An Elizabeth I Mystery

In Harper's enjoyable seventh historical (after 2003's ), set in the spring of 1565, one of Elizabeth's protégés, the portrait artist Gil Sharpe, returns to London from studying in Italy two years early. Within days of Gil joining the rest of the court at Nonsuch Castle in Surrey, a fellow artist and his serving boy die in a mysterious fire. When another artist's work shows signs of scorching, Gil becomes a suspect in the crimes, and his evasiveness about his early return from Italy undermines Elizabeth's confidence in him. An ingenious plot is afoot that preys on the queen's fear of fire, a plot that may involve one of her dearest and most trusted friends and advisers. But which one? Even members of the queen's privy council aren't above suspicion. Is the plot promoted by her Roman Catholic cousin Mary, Queen of Scots? In her attempts to unmask the conspirators, the young Elizabeth reveals a lighter, less formal side of her character; she's not afraid to hitch up her skirts and run when someone she cares about seems threatened. Such actual historical figures as the dour Sir William Cecil, the queen's secretary, and alchemist Dr. John Dee add color to this well-researched mystery