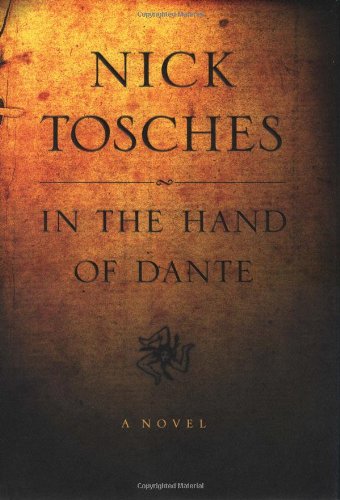 IN THE HAND OF DANTE

Deftly blending the sacred and the profane, Tosches boldly casts himself as the protagonist in his latest novel, an outrageously ambitious book in which he procures a purloined version of the original manuscript of while tracing Dante's journey as Dante struggled to complete his penultimate work. The initial chapters find Tosches looking back and questioning the results of his fascinating life and career, with a brief but devastating aside about the decline of publishing. But Tosches suddenly emerges from his morbid nostalgia when a former character named Louie (a gangster from Tosches's ) gets his hands on a stolen copy of Dante's manuscript and asks Tosches to authenticate it. That sends the author on a whirlwind tour to Arizona, Chicago, Paris and then London as he tries to verify the work and then determine its worth on the open market. The subplot involving Dante's journey is flat and stale by comparison, despite some impeccable scholarship by Tosches as he chronicles the great poet's efforts and setbacks. Tosches's sense of the shock value of his story line doesn't waver, and there's never a dull moment as he opines about modern culture, the Mob, the Oprah Book Club, Zen editing and the joy of being edited, September 11, the artistic process and anything else that happens to hop into his head for a few pages. The ending is a bit of a letdown, but fans of the one-man literary show that is Nick Tosches will doubtless love this book. Overall, it remains incomplete as a novel because of Tosches's inability to bring Dante to life as a character, although the author's admiration for him as a creative force results in a number of compelling passages.