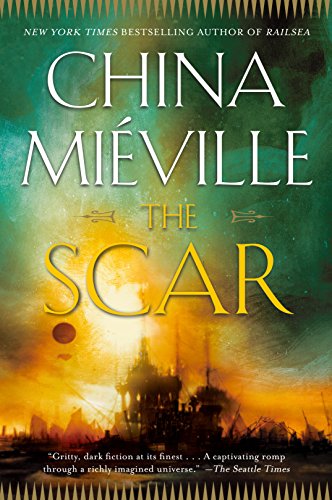 In this stand-alone novel set in the same monster-haunted universe as last year's much-praised , British author Miéville, one of the most talented new writers in the field, takes us on a gripping hunt to capture a magical sea-creature so large that it could snack on Moby Dick, and that's just for starters. Armada, a floating city made up of the hulls of thousands of captured vessels, travels slowly across the world of Bas-Lag, sending out its pirate ships to prey on the unwary, gradually assembling the supplies and captive personnel it needs to create a stupendous work of dark magic. Bellis Coldwine, an embittered, lonely woman, exiled from the great city of New Crobuzon, is merely one of a host of people accidentally trapped in Armada's far-flung net, but she soon finds herself playing a vital role in the byzantine plans of the city's half-mad rulers. The author creates a marvelously detailed floating civilization filled with dark, eccentric characters worthy of Mervyn Peake or Charles Dickens, including the aptly named Coldwine, a translator who has devoted much of her life to dead languages; Uther Doul, the superhuman soldier/scholar who refuses to do anything more than follow orders; and Silas Fennec, the secret agent whose perverse magic has made him something more and less than human. Together they sail through treacherous, magic-ridden seas, on a quest for the Scar, a place where reality mutates and all things become possible. This is state-of-the-art dark fantasy and a likely candidate for any number of award nominations. ().