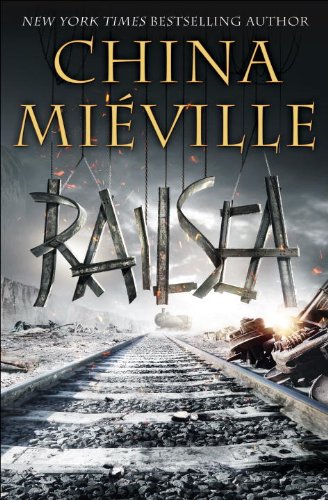 Miéville (Un Lun Dun) returns to YA fiction with a superb, swashbuckling tale of adventure on the railsea, a vast prairie densely crisscrossed by train tracks: “Tracks & ties, in the random meanders of geography & ages, in all directions. Extending forever.” Sham, an orphan, has gone to railsea as apprentice to a train’s doctor. That train, the Medes, is a moletrain that plies the railsea hunting the great moldywarpes (giant moles) that live beneath the dirt, harpooning the subterranean creatures when they surface and rendering them down for meat, fat, and fur to be sold on the mainland. The train’s captain, Naphi, is a strange, charismatic woman who lost her arm to an enormous ivory mole, Mocker-Jack; obsessed with killing the creature, she’s willing to sail to the mythical ends of the railsea to catch him. Working variations on such classics as Moby-Dick, Robinson Crusoe, and A Wizard of Earthsea, this massively imaginative and frequently playful novel features eccentric characters, amazing monsters, and, at its heart, an intense sense of wonder. Ages 12–up. Agent: Mic Cheetham Literary Agency. (May)
close
Details