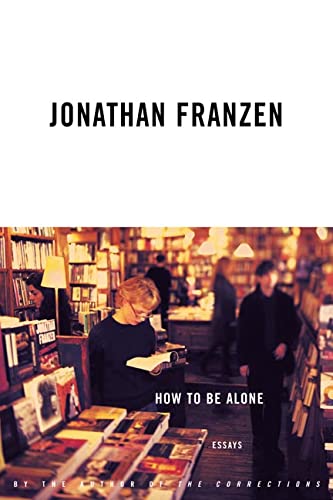 HOW TO BE ALONE: Essays

Bestselling and National Book Award– winning novelist Franzen () urges readers to say no to drugs, but not the pharmaceutical kind; his opiates are those "technology offers in the form of TV, pop culture, and endless gadgetry," soporifics that "are addictive and in the long run only make society's problems worse." Franzen's just as hard on intellectual conformity—on academe's canonization of third-rate but politically correct novels, for example. As a serious artist, he knows that the deck is stacked against him; after all, a great novel is a kind of antiproduct, one that is "inexpensive, infinitely reusable, and, worst of all, unimprovable." The problem, he says, is that instead of being allowed to enjoy our solitary uniqueness we are all being turned into one gigantic corporate-created entity, a point Franzen makes tellingly when he says that while a black lesbian New Yorker and a Southern Baptist Georgian might appear totally different, the truth is that both "watch every night, both are struggling to find health insurance... both play Lotto, both dream of fifteen minutes of fame, both are taking a serotonin reuptake inhibitor, and both have a guilty crush on Uma Thurman." These canny, well-researched essays (which have appeared in the , and elsewhere) range over a variety of subjects, from the antiquated and bizarrely inefficient Chicago postal system to the bizarrely efficient new privatized federal prisons, but they are united by a single passionate insistence that, in a cookie-cutter world, people who want simply to be themselves should have the right to do so.