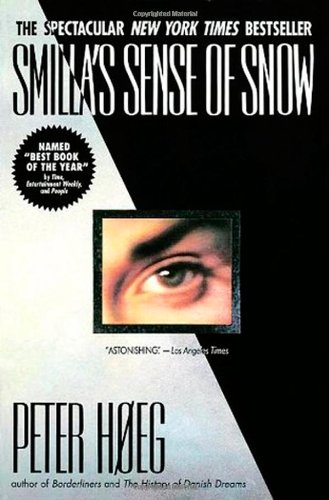 The title of this quiet, absorbing suspense novel by a Danish author only suggests the intriguing story it tells. After young Isaiah Christiansen falls from a snow-covered roof in present-day Copenhagen, something about his lone rooftop tracks--and the fact that the boy had a fear of heights--obsesses Smilla Qaavigaaq Jaspersen, a woman who had befriended him. Smilla is 37, unmarried, and, like Isaiah, part of Denmark's small Eskimo/Greenlander community. She is also a minor Danish authority on the properties and classification of ice. Her search for what had frightened the boy leads her to uncover information about his father's mysterious death on a secret expedition to Greenland, a mission funded by a powerful Danish corporation involved in a strange conspiracy stretching back to WW II. As related in Smilla's sober, no-nonsense narration, the plot acquires credibility even as its details become more bizarre. While the novel will probably be compared to Gorky Park , Hoeg has much more to offer, both in terms of his impeccable literary style and in the glimpses he provides of an utterly foreign culture. Its chief virtue, however, is the narrator: Smilla is never less than believable in her contradictions--caustic, caring, thoughtful, impulsive, determined and above all, rebellious. Smoothly translated by Nunnally, this is Hoeg's third novel, but the first to appear in English. A dark, taut, compelling story, it's a real find. 40,000 first printing; $50,000 ad/promo; BOMC selection. (Sept.)
close
Details