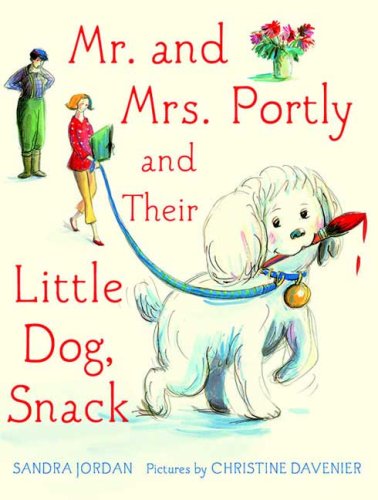 Mr. and Mrs. Portly and Their Little Dog, Snack

Ostensibly, this is a familiar story of a dog that works its way into the hearts of a couple by virtue of its innate cuteness and quirky heroism. But what Jordan ( ) has really written is a portrait of an idiosyncratic, childless marriage. Mrs. Portly, an amateur painter, impulsively adopts Snack at a farmer's market, trying not to think about “persnickety” Mr. Portly's reaction. Given what Mrs. Portly reveals in her anxious conversations with Snack, it doesn't look promising: “Don't bark before Mr. Portly wakes up,” Mrs. Portly tells Snack, as Davenier ( ) shows a worried look on both sides of the conversation. “Don't get hair on Mr. Portly's suits. And never, ever put so much as a paw in the living room.” The more the idyllic relationship between mistress and pet deepens, the more readers may suspect it might be better if Mr. Portly never returned from his fishing trip. Have no fear: the resolution is indeed happy for all concerned, and Davenier's customarily luminous watercolors keep the action from straying too far into Updike/Cheever territory. Ages 4–8.