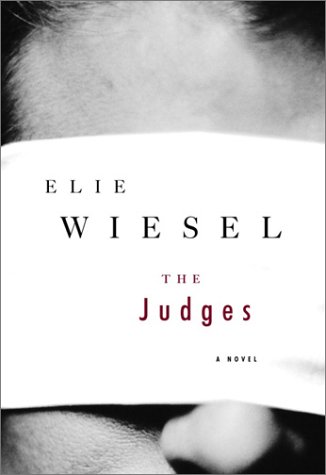 There are two strains in Nobel Peace Prize–winner Wiesel's work. One is testimonial. Beginning with his classic, , Wiesel has made himself one of the great witnesses of our time. The other strain derives from Wiesel's fascination with parables and fables. In the 1950s, when Wiesel became known, the allegorical mode (suitably fitted out with existential meanings, as in Sartre's ) enjoyed a brief vogue. His latest novel even refers to Sartre's play as it portrays a sort of metaphysical hostage taking. A plane bound from New York to Israel is forced to land in a snowstorm in Connecticut, and five passengers are taken to the house of a local man who has the delusion that he is a judge in a capital case. As the guests respond to the judge's more and more personal and insinuating questions, their characters are revealed. Claudia, a pretty theater press agent, wants to get out of the situation by complying; Bruce, a self-described playboy, opts for childish defiance. George, an archivist, and Yoav, an Israeli soldier, respond in more restrained ways. The most thoughtful figure, Razziel, is the principal of a yeshiva. His impressions provide the frame of the drama. Each character, caught in the facts of his or her past and oriented toward future projects, must confront a present threat that crystallizes their existences. Wiesel is obviously closest to Razziel, whose past experiences in a Romanian prison and interest in mysticism mirror, in lightly fictionalized form, factors in Wiesel's own life. There is a certain creakiness about the plot, reminiscent less of Sartre than of the ; the story seems more suited to the stage than the novel form. However, the authority of Wiesel's public persona always invests his writings with interest.