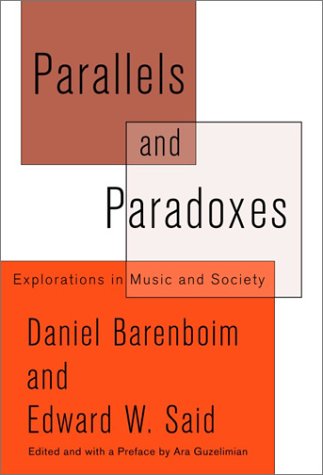 PARALLELS AND PARADOXES: Explorations in Music and Society

Renowned pianist and conductor Barenboim, currently general music director of the Deutsche Staatsoper Berlin, comes from a Russian Jewish family transplanted to Argentina and Israel. Said (), Columbia professor of English and comparative literature and an accomplished amateur pianist, is a Palestinian who grew up largely in Cairo in an anglicized Christian Arab family. Their differing but entwined histories have led to friendship and a number of public and private conversations about music, culture, politics and "the parallels as well as the paradoxes" of their lives. Edited by Guzelimian, Senior Director and Artistic Adviser of Carnegie Hall, these stimulating discussions—written in the form of three-way Q&A interviews—touch on the nature of sound, some of the similarities and differences between music and literature, performances and audiences, and the authenticity movement. The two agree on the importance of music in uniting people of conflicting political views, and in 1999 they collaborated in setting up the Weimar workshop, which brought together Arab, Israeli and German musicians to form an orchestra. The importance of setting aside national identity in favor of a larger ideal is stressed throughout the book. Barenboim shows himself to be unfazed by the recent controversies surrounding his work in Berlin and his determination to perform Wagner in Israel. Said remarks that in today's world, it has "become quite rare to project one's self outward, to have a broader perspective." These enlightening conversations show that Said and Barenboim are able to do just that. .)