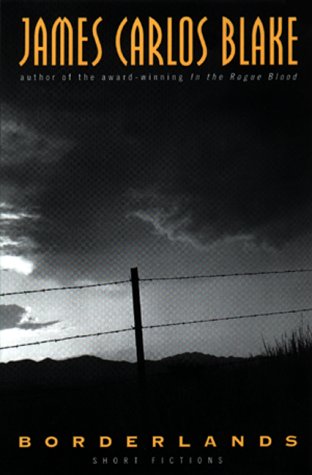 Again mining the territory of bleak lives on the fringes of society, L.A. Times Book Prize-winner Blake (In the Rogue Blood and Red Grass River) has crafted seven short stories and a novella about people surviving in the merciless borderlands dividing Mexico and the U.S. Characters from South Florida, the Gulf of Mexico and Texas are fully sculpted in Blake's visionary dystopia, their struggles neither heroic nor dishonorable. The complexity of border culture is graphically drawn, with its omnipresent threats of la migra, unemployment, bigotry and despair. Blake begins the collection with an engaging and informative introductory memoir, a chronology of his childhood in the borderlands and of his mixed Mexican/Texan heritage. The stories that follow are brutal, stark and horrifying; in ""Runaway Horses,"" a just-widowed man is driven mad when he attempts to deliver just punishment to his wife's rapist and murderer. In another narrative, an illegal immigrant falls in love with an ex-prostitute with three children, but succumbs to his fear of commitment. Female characters suffer violently in these stories, often victims of rape, incest or murder. ""Texas Woman Blues"" is a searing portrait of hopelessness and horror. Dolores (dolar, pain in Spanish) experiences a lifetime of pain before her 17th birthday. Abandoned by her father, who ends up in prison, on her mother's death she is sent to live with relatives and is raped by her uncle. When she finally bolts free, the cycle of victimization expands into a bleak and unforgettable chronicle of dead-end options. Blake writes with a fearless precision and a ruthless sensibility, his prose is spare and tough, and his descriptions detailed and cinematic. This is gritty, raw, bare-knuckled fiction, blazing with an extraordinary kind of violence, and certainly not for the faint of heart. (Apr.)
close
Details