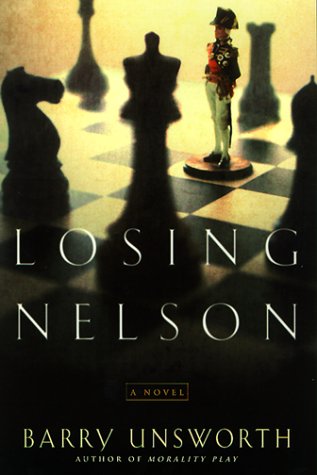 Unsworth (Sacred Hunger; Morality Play) delivers another memorable tour de force in this tense portrait of a London man obsessed with Britain's greatest naval hero, Lord Nelson. Charles Cleasby lives by the ""Horatio calendar,"" reenacting Nelson's battles with model shops on a glass table in his basement. In his mind they are joined: Nelson is a radiant angel, a hero of unstained virtue, and he is Nelson's other, shadow side: ""I was his heir, I had inherited his being."" For years Cleasby has been writing a book extolling Nelson's heroism, but has become blocked over a controversial incident in June 1799, when Nelson apparently tricked two fortresses of Neapolitan rebels into surrendering, under promise of a safe conduct, then turned them over to their murderous Bourbon king and queen for hanging. Unsworth's control of his material, and his artistic ingenuity, his narrative skill in what is essentially a highly literate suspense novel, are supreme here. By compressing the milestones of one man's lifetime into the calendar of another man's year, he creates a shuffled chronology of historical events that parallels his narrator's wavering state of mind. Paragraph by paragraph, Cleasby's sense of self shifts and dissolves; in one paragraph he describes the view of Nelson's ship entering Naples harbor, in the next ""we"" are standing at its prow, and in the next it's ""I"" onto whose arm Lady Hamilton is swooning. Cleasby's erotic stirrings for Emma Hamilton and his misadventures with London's Nelson Club are the stuff of high comedy, and it's hard to say exactly why this novel seems so unsettling and suspenseful. Unsworth holds open a door to normalcy in Cleasby's growing attraction to Miss Lily--hired to transcribe his manuscript to a word processor--whose down-to-earth and very contemporary responses put Nelson on a more human scale. The book's surprise ending, held back to the final page, seems therefore all the more cruelly ironic--and probably the nastiest twist of any in recent fiction. BOMC selection. (Oct.)
close
Details