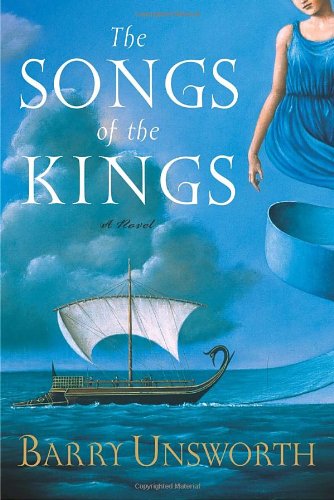 THE SONG OF THE KINGS

Provocative and subversive, Unsworth's new novel rewrites ancient history to show how a wily, ambitious and power-hungry man can distort the truth, convince the masses to support him and incite his country to wage war. It's an audacious blending of myth with sharp contemporary resonance. The setting is Aulis in 1260 B.C., where unfavorable winds are keeping the fleet of the Greek expeditionary force (actually a motley assemblage of hostile and predatory tribes loosely united under Agamemnon) from setting out to capture Troy. The pretext is revenge for the "rape" of Helen by Paris, but Agamemnon and such tribal leaders as Achilles and Odysseus are, in fact, lusting for the fabled treasures of Troy, spoils of war that each man, down to the most common soldier, yearns to possess. Unsworth () reveals this complex intrigue slowly as he explores the critical situation on which the narrative hinges: the omens that explain Zeus's wrath and the prophecy that only the sacrifice of Agamemnon's daughter, Iphigeneia, will reverse the contrary winds. We know of this event from Homer, of course, and he appears here as the Singer, a far from noble figure who is influenced by the conspirators to fashion the version fed to him by Odysseus. It is the hero of who gradually emerges as the chief villain, cynically manipulating his cohorts as he exploits the prophecy to serve his own ends. And it is Iphigeneia, lured to Aulis by false promises, who shows more moral courage than the king, his enemies or any of the court sycophants who seek only their own advantage.

Unsworth's narrative method is as daring as his message; his prose is a mixture of classic cadences and contemporary vernacular, animated by beautifully descriptive vignettes and bawdy humor. He uses a minor figure, Calchas the diviner, as the means through which the reader understands the political machinations that create the illusion of a just war. "People intent on war always need a story, and the singers always provide one.... What [this] is really about is gold and copper and cinnamon and jade and slaves and timber," Calchas says. "It is the stories told by the strong, the songs of kings, that are believed in the end."