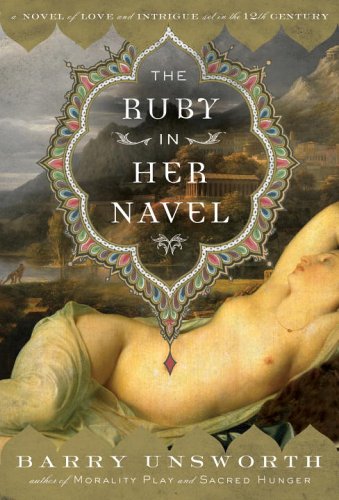 The Ruby in Her Navel

Enticing titles are typical of Unsworth ( ); his gleam, this time out, is dimmed by the setting. Thurstan Beauchamp, royal purveyor of pleasures and shows in the 12th-century Kingdom of Sicily, laboriously narrates his daily rounds, which involve delicate low-level negotiations and machinations. Four pages are devoted to the sale of three mules, in language as artificially antique and exotic as it is languorous. Relief comes in the sudden appearance of Lady Alicia, who had been Thurstan's love back when he was on a track to knighthood. Bittersweet reflections on his thwarted destiny provide some of the most affecting moments. But the lady is too good to be true, and she proves central to a vile plot in which Thurstan betrays a friend. Perfidy brings epiphany; Thurstan realizes Alicia could not have seduced his soul had he not invested her with the power. And Alicia is not the "Lady" of the title: that distinction belongs to Nesrin, the smolderingly beautiful belly dancer whose name appears on the first page, but whose story is teasingly withheld until further in. It is she who provides the inspiration for Thurstan's self-exploration, burnishing a mind of which we learn rather too much.