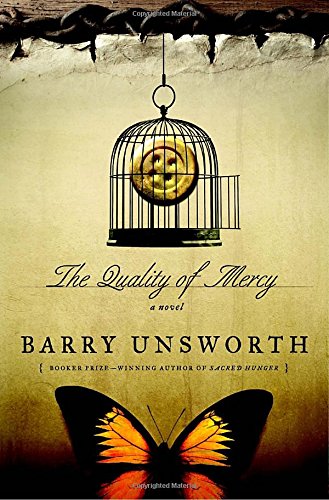 The Quality of Mercy

Unsworth’s sequel to his 1992 Booker Prize–winning Sacred Hunger centers on a 1767 London court case resulting from the slave ship mutiny of the previous novel. Pretrial maneuvering, in-court manipulation, out-of-court negotiations, and post-trial reverberations are shown through the eyes of dedicated abolitionist Frederick Ashton; determined ship owner Erasmus Kemp; captured crew members who would say anything not to be hanged; and lawyers and underwriters who would do anything to protect their interests, along with even other perspectives. The action begins when the Irish fiddler Sullivan flees Newgate Prison, journeying north to the colliery village where a deceased shipmate’s family resides, including a coal miner father who dreams of working above ground and a seven-year-old preparing to work below. Kemp arrives in search of new commercial opportunities. Wryly, and with Austenesque delicacy, Unsworth presents the intricacies of love, competition, and other timeless human emotions, as well as 18th-century law (if slaves thrown overboard were already dying, the insurance company was not liable for lost property, etc.). Having invented his own brand of historical fiction, characterized by research, imagination, and a literate narrator equally adept at penetrating a society’s values or an individual’s heart, Unsworth creates a novel that works both as period piece and indictment of industrial capitalism. If this sequel lacks the freshness of its predecessor, it succeeds in presenting a compelling picture of a transitional moment in English history, not to mention in the development of the English character. Agent: Sheil Land Associates, U.K. (Feb.)
close
Details