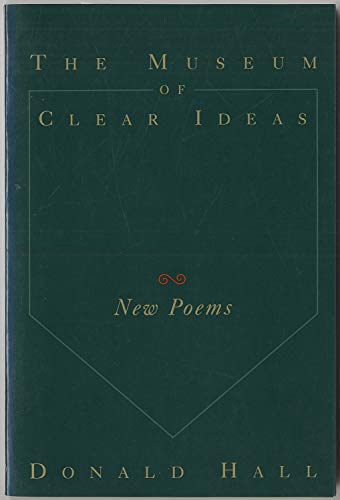 The Museum of Clear Ideas

Death opens this collection of powerful new poems by Hall ( The One Day ) with ``another elegy in the tradition / of mourning and envy, love and self-love--as another morning / delivers rain on the fishbone leaves of the rotted year.'' The poet so eulogized, however, is the fictional Bill Trout, ``twelve Aprils'' dead, and his arcane progress from Idahoan boyhood through midlife detox to madness--typical stations of the contemporary poetic cross--is gently mocked. Irony is the pitch sustained throughout the book, especially in the discursive poem ``Baseball'' (composed of nine innings of nine stanzas of nine lines each), wherein the narrator, K.C. from Mudville, fancifully explains baseball to the dead Dada collagist Kurt Schwitters. To K.C., poets resemble pitchers with their ``fool 'em tricks,'' and the sport transcends motion: ``Baseball, like sexual intercourse / and art, stops short, for a moment, the / indecent continuous motion/of time forward, implying our death / and imminent decomposition.'' Loosely imitative of Horace's first book of odes, the title poem is a tour de force in which witty, allusive Horsecollar (a minor character in Disney comics) debates with the persona of Mister Zero in ``his prophylactic smirking dog-cynicism.'' Horsecollar discourses on rage, advises carpe diem , and cuts to the marrow of sexual passion and the mortal wounds of destiny: ``Do we determine our lives or suffer them?'' Death closes this volume with musings on the end of the game in ``Extra Innings.'' Hall's voice is more mature and classically spare than ever, offering revelatory glimpses of wisdom. (Mar . )
close
Details