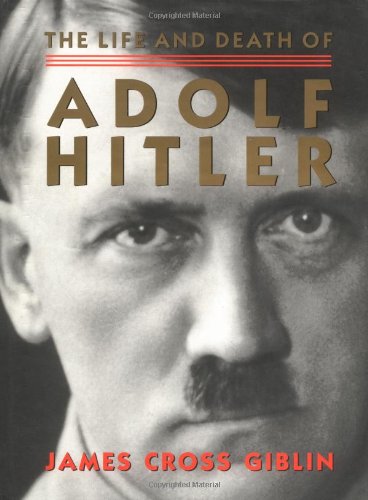 THE LIFE AND DEATH OF ADOLF HITLER

In this accomplished biography, Giblin () presents the rise and fall of "the most dangerous—and ultimately the most destructive—twentieth-century dictator." The author begins with Hitler's birth and modest upbringing in Austria and failed artistic aspirations, and follows his years as a WWI soldier and his budding abilities as a political orator (an army superior noted, chillingly, "Herr Hitler is a born people's speaker.... He clearly compels the attention of his listeners, and makes them think his way"). The compelling narrative then traces Hitler's gradual accumulation of power, including his early political associations with the Nazi Party, a failed 1923 coup attempt and subsequent imprisonment (where he penned his plans for political domination and the annihilation of European Jews in ). This insightful historical overview describes the social, political and economic conditions that proved ripe for the dictator's ascent, as it outlines Hitler's life and career, including his iron grip on his adopted "Fatherland" and his commitment to (or additional "living space" for Germany)—which triggered the series of invasions that pushed the world into another war. Abundant primary source quotes and well-researched photographs enliven this comprehensive volume. A closing chapter describes the rise of neo-Nazism both in the U.S. and abroad. Giblin offers an absorbing portrait of an enigmatic leader who loved dogs and opera but could also order the extermination of millions of innocent people. Ages 10-up.