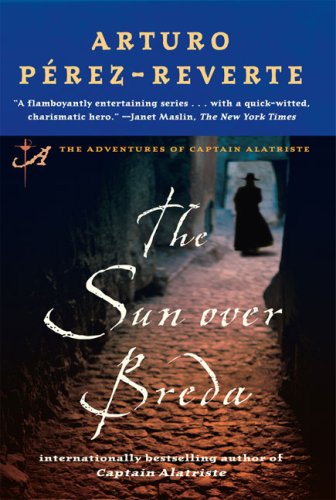 The Sun Over Breda

A former war correspondent, Spanish novelist Pérez-Reverte continues his internationally acclaimed Captain Alatriste series with a third translated volume (following ), every bit as terse and engaging as previous books. Diego Alatriste, a 17th-century mercenary and wily veteran of campaigns from Italy to Flanders, is part of the army of Spanish King Philip IV—a defender of the Catholic faith—that's trying to suppress the Calvinist heretics of the Low Countries. Narrated is retrospect by Íñigo Balboa, who at the time of the action was Alatriste's 14-year-old page, this installment focuses on the Spaniards' siege of the fortified rebel city of Breda. As the stalemate drags on, the battle becomes less "a matter of military interest to Spain but, rather, one of reputation." Its power and influence in decline, Spain's lingering hopes to avoid another embarrassing setback in Flanders rest with stoic warriors like Alatriste. The action is fast, furious, and sanguinary, and Pérez-Reverte grimly recreates the universal madness and desperation of combat. He also captures the tedium and misery that is the common soldier's everyday fate and the zealotry with which Christians—Catholic and Protestant alike—once massacred each other. Factually sound and vividly imagined, this latest incarnation of Captain Alatriste will cheer old fans and win new ones.