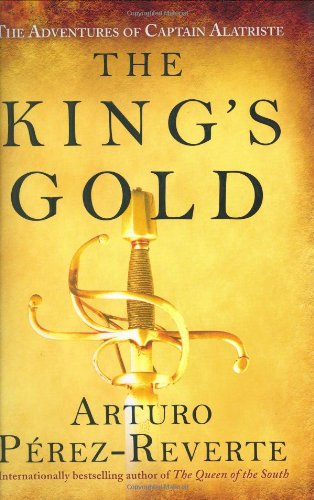 Pérez-Reverte, a former war correspondent, continues his popular Captain Alatriste series with a fourth swashbuckling volume (following ). Diego Alatriste, a wily veteran of many 17th-century military campaigns, and his sidekick, Inigo Balboa—who narrates—have returned to Seville after fighting in the siege of Breda. With funds short, Alatriste accepts a dangerous mission to intercept a load of smuggled gold and deposit it in the royal coffers. Trolling the criminal underworld of Seville, Alatriste recruits a band of ruffians, and disguised as pirates, they prepare to slip aboard the ship transporting the gold, surprise and subdue the crew and beach the vessel. What Alatriste doesn’t expect to find on board is his old adversary Gualterio Malatesta and a large contingent of mercenaries. Fans of the series have come to expect historical authenticity, crisp prose, complex characters, exotic settings and plenty of sanguinary action. They won’t be disappointed.