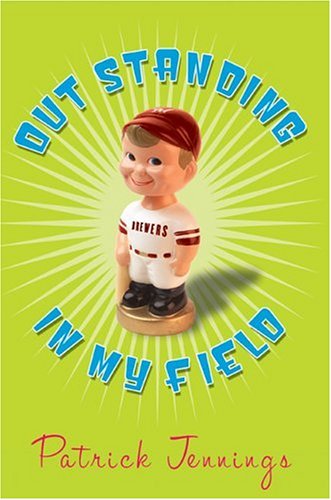 OUT STANDING IN MY FIELD

Jennings ( ) once again demonstrates his versatility with this novel for baseball fans and for those who are more comfortable in the stands than on the playing field. The author uses the span of a single Pee Wee League game to mine the dynamics of 11-year-old Tyrus Raymond Cutter's family. Narrator Ty quickly reveals that he was named for Tyrus Raymond Cobb by his father, who insists that Ty call him Professor (that's what Cobb called his dad). Though the boy loves baseball, he's no good at it; he bats ninth and plays right field. Unfortunately for Ty, his father ("a grouch with a punctured ego") is also the coach of his team and has made his son captain, earning Ty the deep resentment of his teammates. Ty's appeal is his self-deprecating humor, the way that he takes in his situation and fantasizes about a way out. His 12-year-old sister, Daisy, who sits on the bench (keeping score) and can hold her own against their dad, inspires him to take action. Jennings reveals much about their mother through her cheering from the bleachers, her interactions with her kids after the game, and a judicious use of Ty's memories. Even the Professor emerges as a fully developed character (his claim to fame was one game in the majors, in which he hit a Ron Guidry fastball into a triple play). A final curve ball precipitates an epiphany for Ty. Fans often say that baseball is a metaphor for life; Jennings here proves the adage's truth. Ages 9-12.