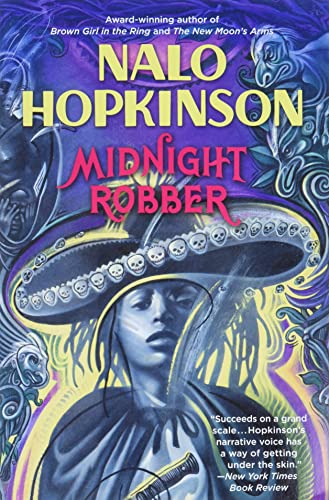 The sounds and rhythms of the Caribbean and Carnival suffuse Hopkinson's second novel (after Brown Girl in the Ring). On the Carib-colonized planet of Toussaint, Antonio Habib, the scheming, philandering mayor of Cockpit County, murders his wife's lover in a rigged duel and must then flee his high-tech planet, taking with him only his young daughter, Tan-Tan. The pair end up on New Half-Way Tree, Toussaint's alternate-universe twin, a primitive and dangerous world inhabited primarily by Toussaint's exiled criminal class and the douen, an alien race reminiscent of creatures from Caribbean folklore. There, Antonio's life lacks purpose, and although he remarries, he gradually degenerates into an angry, sexually predatory drunk. Growing to adulthood, Tan-Tan is deeply scarred by her father's assaults on her. Eventually she kills him in self-defense and, pregnant with his child, flees into the forbidding bush that surrounds their small settlement. Tan-Tan is kept on the run by Antonio's jealous widow, seeking vengeance for her husband's death. Hiding among the trees, Tan-Tan learns the secrets of the douen and gradually transforms into another figure out of Caribbean folklore, the Midnight Robber, who dresses in black, spouts poetry, steals from the rich and gives to the poor. Hopkinson's rich and complex Carib English can be hard to follow at times, but it is nonetheless quite beautiful; her young protagonist, at once violent and vulnerable, is extremely well drawn. Both Toussaint, a world almost awash in nanotechnology, and the more primitive New Half-Way Tree are believable, lushly detailed worlds. Like its predecessor, this novel bears evidence that Hopkinson owns one of the more important and original voices in SF. Agent, Don Maas. (Feb.) FYI: Brown Girl in the Ring won a Locus Award for Best First SF Novel.
close
Details