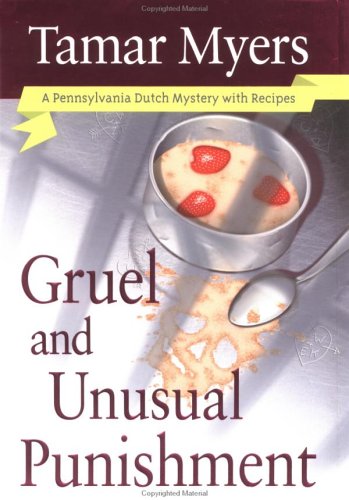 GRUEL AND UNUSUAL PUNISHMENT: A Pennsylvania Dutch Mystery with Recipes

Though this 10th Pennsylvania Dutch mystery installment's blend of intrigue, wit and recipes will likely satisfy Myers's fans, it's unlikely to win new followers. In her latest outing, Magdalena Yoder, the Mennonite keeper of the PennDutch Inn, joins forces with the Bedford, Pa., police to investigate the death of a prisoner in the local jail. Clarence Webber, credit-fraud perp and predator of wealthy women of a certain age, has been poisoned with arsenic—in a meal provided by the PennDutch Inn. Magdalena, who is anxious to clear her name, starts interviewing the visitors he had in prison, and she soon has a list of suspects, each with an ax to grind. Neglecting her inn and her newly acquired foster child to follow clues to Maryland, Magdalena throws herself wholeheartedly into solving the mystery of Clarence's death. She must be getting close, because on the return trip, someone runs her car off the road. But the resilient Magdalena wraps her broken ribs with duct tape and keeps searching for clues. Unfortunately, the characters are generally distasteful—and it's Magdalena herself who's the worst. She may love one-liners—there are about three per page—but she's the only one laughing; she comes across as a spiteful, judgmental woman in the midst of a weak plot and a sloppy story line. Myers has, however, devised a group of recipes for grits, that staple of Southern breakfasts, that proves there can be more to gruel than meets the eye.