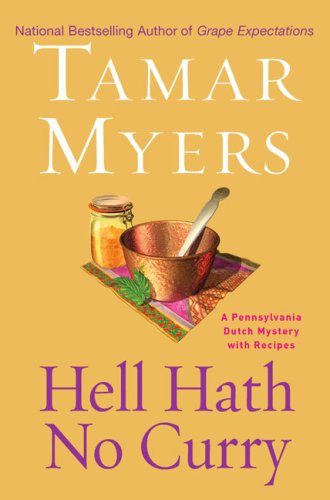 Hell Hath No Curry: A Pennsylvania Dutch Mystery with Recipes

In Myers's over-the-top 15th crime caper starring Amish-Mennonite sleuth and innkeeper Magdalena Yoder (after 2006's ), the corpse du jour is the once-handsome scoundrel Cornelius Weaver, who may have been murdered by any one of seven women—his lovers. Familiar cast members provide the usual foils to Magdalena's running (and often very tired) jokes and too-breezy banter as she worries about her looks and upcoming mixed faith marriage to Dr. Gabriel Rosen more than she does about her investigation of Cornelius's killer. The thin plot is so improbable and haphazard, it's a relief but no great surprise when Magdalena closes that case and solves another murder as well. Cornelius's death-by-painkiller-laced Indian dish inspires the curry-themed recipes sandwiched between chapters. Maybe it's time to close the kitchen and order takeout?