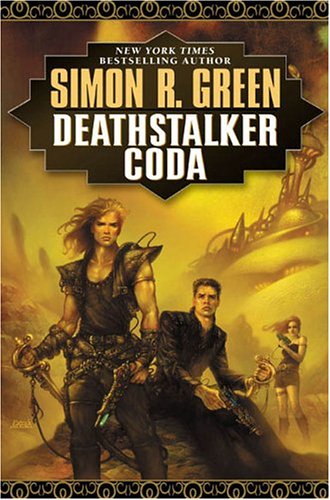 Bestseller Green's wild conclusion to his Deathstalker saga picks up moments after the cliffhanger ending of (2004). Unjustly outlawed Lewis Deathstalker has just brought his ancestor Owen back from the dead to battle the multidimensional, planet-devouring Terror. Meanwhile, Lewis himself tries to assemble and lead a space fleet against the vile minions of usurper Emperor Finn Durandal. In addition, in chapters interrupting Owen's pursuit through time and Lewis's jaunts through space, former Emperor Douglass Campbell must pull himself together to mastermind a rebellion in Finn's capital city. This listing of major plot threads doesn't begin to suggest the full story's feverish complexity. Fortunately, when the stage gets too crowded, the author kills off a few supporting characters, not to mention millions of faceless extras. In some ways, this SF novel resembles mid-grade anime—much better on explosions and mortal combat than characterization; however, it does tie up the series' loose ends coherently. Moreover, even if the major characters legends, larger and stranger than lifesize, Green's ingenuity and sarcastic prose style keep readers from getting grossed out by the bloodshed or bored by tired space opera theatrics. He knows the action is so far over the top that it almost slips into farce, but he usually manages to keep his balance, arms waving frantically, right on the edge.