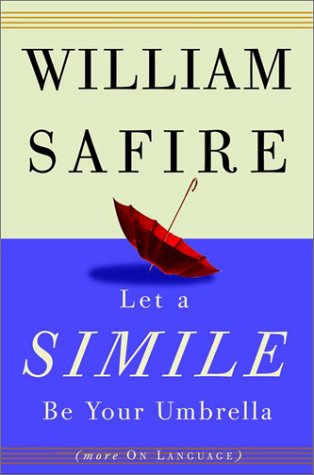 LET A SIMILE BE YOUR UMBRELLA

This 12th collection from Pulitzer Prize–winning political columnist Safire's "On Language" column (in the since 1979) proves that there is no wittier, more gracious stickler for correct usage and grammar. Though "idioms is idioms" (he allows for homey advice like "dance with the girl you brung"), Safire won't let anyone get away with "flaunt" when they mean "flout," "momentarily" when they mean "soon," or "drive-by pregnancy" (as was used by President Clinton) when referring to the overly short hospital stays called "drive-by deliveries." When "New" is dropped from New Jersey, Safire reports on the "widespread clipping of the Garden State." Reading Safire, the reader discovers unsuspected but definitively mangled parts of speech. The author sometimes spins hypothetical misuses for the well-turned phrase or choice vocabulary word: regarding words only used in the plural, "a single pastie would be in the category of one hand clapping." Looking beyond syntax, Safire notes the transformation of "down the toilet" into "down the drain" and widespread lexical insensitivity in allowing Native Americans to be slurred by "Indian summer" and the chronologically advanced by "geezer." Meanwhile, the same feminists who insist on "actor" (not "actress") would never call Madonna a "sex god," alleges Safire. This word maven often quotes readers who catch his own bloopers and those of other writers, pointing out gems like, "I could never watch in toto." The linguistic wisdom of this celebrated publishing fixture will continue to attract Jane Doe, Joe Blow, John Q. Public and Joe Six-pack (variants discussed herein). 60 b & w illus. not seen by .