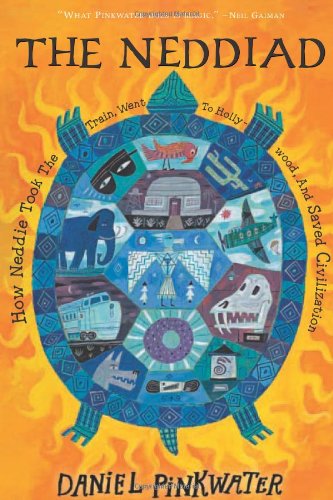 The Neddiad: How Neddie Took the Train, Went to Hollywood, and Saved Civilization

In Pinkwater's ( ) wonderfully silly book set in the late 1940s, young Neddie Wentworthstein mentions to his father that he wants to eat in the famous restaurant shaped like a hat. Never mind that the Brown Derby is in Los Angeles and the family lives in Chicago—Neddie's eccentric father (who made a fortune selling shoelaces during WWII) also wants to eat there, so he packs up the family for a cross-country train ride to make California their new home. Neddie gets separated from the family in Flagstaff, Ariz., and meets a movie star's son, a friendly ghost and a shaman who gives Neddie a carved stone turtle. Neddie learns that the turtle "keeps things from getting out of order," a kind of "evolutionary compass." Trailed by the sinister Sandor Eucalyptus (aka Nick Bluegum), the young hero switches the turtle with a fake in a taxidermist's shop but Sandor simply purchases it, not knowing he's snagged the real thing. Police from outer space, and a prehistoric earth spirit figure into the finale of an evil plan concocted in the Hollywood back lots. The author creates secondary roles as interesting as the starring characters. Even if there were no quest at the heart of the tale (and there is a good one) this would be a highly entertaining road trip—thanks to Pinkwater's one-of-a-kind comic sensibility and his uncanny ability to access the language and mindset of boys. Ages 10-up.